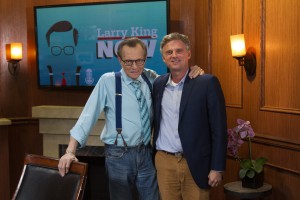 WHEN I THINK ABOUT ALL THE TIME I HAVE SPENT WRITING A BOOK, BY-MYSELF, FIGUREING OUT WAYS TO GET PEOPLE TO READ IT, THINKING ABOUT HOW, “IF JUST ONE INFLUENTIAL PERSON LIKE LARRY KING, OR PEYTON MANNING, OR PAUL YOUNG WERE TO TELL THEIR PEOPLE THAT POSSIBILITIES IS ACTUALLY GOOD AND THAT IT WILL MAKE YOU STOP AND THINK ABOUT YOUR LIFE AND THE THINGS YOU CAN DO DO MAKE A DIFFERENCE IN THE FIGHT AGAINST CHILDHOOD CANCER,” I HAVE TO REMIND MYSELF THAT “THE POSSIBILITIES” ARE ENDLESS… BUT THE BAND WIDTH IS NOT.  I have a ledger that outlines all of the expenses I have poured into this project.  I do not have a ledger that itemizes the hours I have given to it, nor do I have a remote notion of the time that each member of my family has had to put aside to: particapte in an interview, go on “another trip with daddy so he can talk about his book and Press On.”  I am afraid that it I had this accounting in front of me right now, I would vomit and tell myself… “once again, you have proven that you are an expert in wasting time and money.  You have spent an entire kid’s college tuition on a whim and proven to yourself that your dreams are simply that… “your dreams.”

But then it happens.  I hear that endorsement bestselling author has read the book and wants to write a endorsement for it.  Then I get a call from a stanger in Pennsylvania who tells me that he bought 100 books to give away at a event becasuse he felt that this story was so inspirational that he decided to have his own fundraiser for St Jude and raised over $200,000 in one night.  Or I get a letter from a mom who tells me that, having been given a copy of Possibilities from a friend, they have decided to defy the “assured position” of their Doctor and seek a second opinion which has allowed their child to press on and have another chance to live.

I wish I were so successful professionally, or that I had won a lottery, of some real or figurative sort, to be able to afford the luxury of accepting this book project as a good-will exercise, allowing myself the means to tell our story so that even a handful of people can be given hope or the courage to keep fighting.  Since I am not, I simply have to believe in the Possibilities that this book will one day generate enough traction that it will become a household name and somehow make a difference in the fight against pediatric cancer.  So I simply press on myself, seeking interviews and doing the occasional speaking gig so that I can touch another handful of people who will then tell another handful of people, and so forth and so on.

Enough people, both readers and people in the literary community, tell me that this book is well enough written and powerful enough in its story line that it is “important.”  So, while my blog may sometimes fall behind, or my Facebook page may gather dust for a few weeks, please know that I am simply out there trying to pay my bills and generate opportunities so that I can afford to keep this thing going until that one influential person tells their millions of followers, “you have to read Possibilities… it will make you want to be part of the fight against pediatric cancer.”  I believe in this story because I was witness to it, and I have to believe that, while all of these otehr kids have died, Brennan’s survival will help give their trials with cancer meaning.

And, at the end of the day, it is affording me countless opportunities to meet new people and tell others who I have met along the way, “thank you…. thank you for your prayers and thank you for spreading the word.”

One Response to Writing for and with a Purpose